Almost all of us have watched “Titanic” at least once in our life, or we know a lot about it. We also know for people who watched it once and can’t do it again, those who simply stop the movie once the sad scenes begin so they won’t cry again. As we know, the team that won 11 Oscars did a great job when recreating the popular boat that sunk on its first trip to America. Also, the boat in the movie is pretty accurate compared to the real one, because the director James Cameron worked really hard for months, together with the whole team, so they can deliver this movie to the audience as much accurately as they can. Surely, some things can’t be completely copied for the movie, and some secrets are forever down there in the Ocean, but one thing is for sure – in 1997, the whole world finally saw the story on the big screen, followed by the love story of Jack and Rose, the third class boy and first-class girl, and their tragic ending, as Jack died because he wasn’t a priority to be saved.

There are so many topics to discuss in the movie and the historical events, together with the fashion. Today, we have more freedom to wear the clothes we want and choose our accessories according to our taste and preferences, including even the eyeglasses, as you can see on designeroptics.com, but back then, things weren’t that easy. The first class especially was traveling with their most beautiful clothes, jewelry, wearing uncomfortable shoes (remember the scene when Rose is taking them off so she can dance), and wearing makeup all the time – or that’s what we see in the movie.

Many people will say that the costumes the actors and actresses wear in the movie are accurate to the historical period the accident happened. The costumes were created by the designer Deborah Lynn Scott, and she even got an Oscar for her exceptional work.

But, as we snoop on the Internet to see original photos compared to movie scenes, we can say that there are indeed some differences.

For example, the corset scene while Rose is having a conversation with her mom is really accurate. Back then, women were wearing tight corsets, to shape their figure, just to show some silhouette. It was a huge thing in 1912, no matter how the natural body shape looks. It was practical for wearing under the layers of dresses, but that particular year was the period when most of the women decided that they will skip the corset, since it caused them problems with breathing and digesting the food. But, one detail doesn’t match with the historical pictures – Rose’s corset goes over her breasts, and those from 1912 fashion magazines are right under them. On the other hand, the rest of it is very accurate.

In 1912, women were at the beginning of the adoption of the French fashion trends, but once again, the designer Deborah Lynn Scott made them both accurate and visually attractive for the movie, she even won Oscar for that. She got inspired by the fashion pieces from that time, adding some artistic details, and creating those exceptional costumes we all love. She paid so much attention to Rose’s clothes, as she is the one that appears on the screen mostly.

For example, the afternoon suit that Rose wears is almost a copy of the afternoon suits women were wearing that period. The one we can see in the movie is copied from a French fashion magazine from 1912, assuming that Rose and her mom were rich, and so was her fiancé, and they could afford to follow the French fashion, and buy clothes from Paris. There is no proof that the “original” Rose was wearing that exact design of an afternoon suit, but probably she did, and it’s perfectly done in the movie.

What about the evening dresses?

There are a few scenes we can see Rose in pretty fashionable gowns for the evenings and dinners. We can see shiny layers of textile, high waistline models, and narrow skirts. Both of these models were popular in 1912 too. Diamond jewelry was popular back then also, and even the “Heart of the Ocean” is the same as the original, even though it maybe wasn’t that big in reality.

But, one thing they got completely wrong! 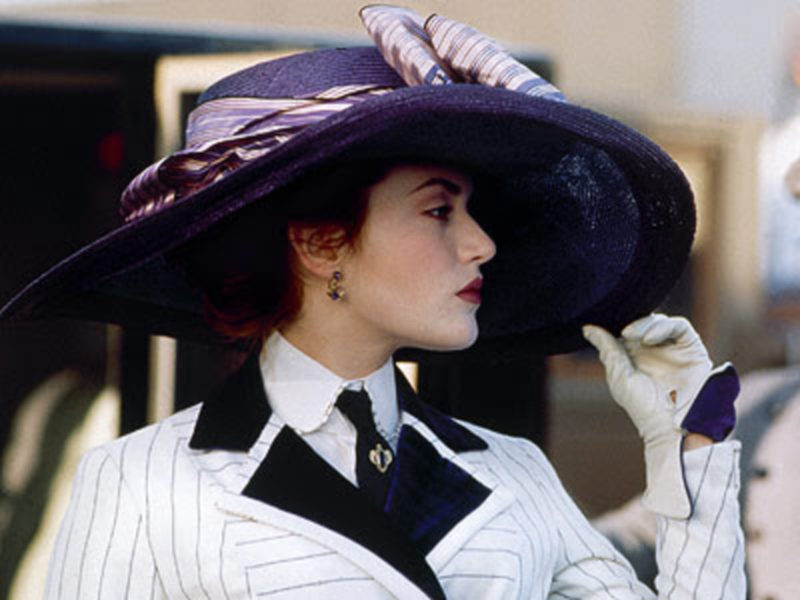 The dresses and shoes are accurate, accessories too, and so is the jewelry. Then, what’s wrong? You guess it’s the makeup. Women weren’t into wearing makeup in the 1910s, and society was pretty judgmental of that. They even called them “painted” if they see a woman wearing them. On the other hand, we can see the actresses wearing complete makeup in the movie scenes. Also, the styles were more compatible with the mid-90s, when the movie was done. Also, movie shots require special makeup, so the actors won’t look pale, and yes, even the men are wearing makeup during the scene shooting.

The movie that moved the whole world

There are a few films based on the story about the “unsinkable boat” that sunk on its first trip to the USA. A lot of people died, especially those in second and third class, but also the staff members. Those who survived ended up having a lifetime of trauma because of that event. The story about Titanic is surrounded by mystery and conspiracy. Some people have theories that the boat was damaged on purpose. But, no matter what the real truth is, the 1997 movie reminded all of us of that historic event.

As much as we enjoy the scenery and fashionable moments, the sinking makes all of us sad, even though the event is back in the past and nothing can be done to change it.

But, if you enjoy the fashion designs, it’s good to know that there is a Titanic museum attraction, where artifacts from the movie scenes and the real boat are shown. You can find it in Pigeon Forge, Tennessee, and there is another one in Branson, Missouri, so you can see the artifacts and get a real-life Titanic experience.