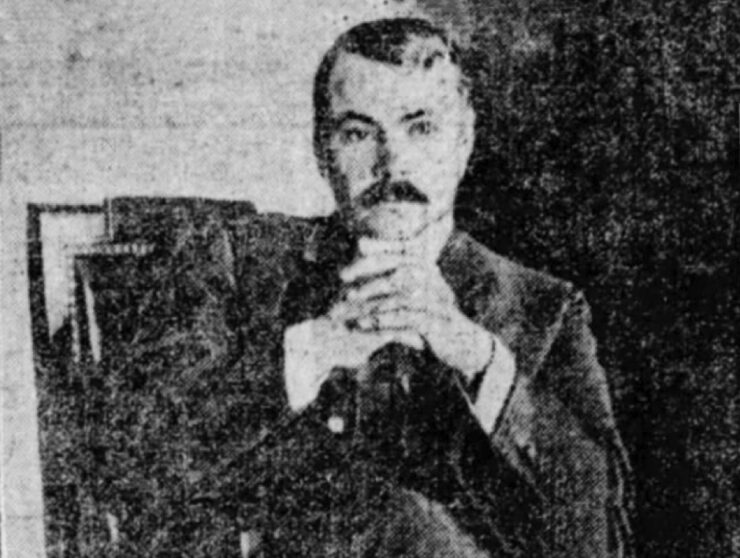 Herbert John Pitman was Titanic’s Third Officer. He had been at sea for almost nine years, and the last five of those had been with the White Star Line.

He received a telegram, as did all the junior officers, informing him to report to the White Star Line’s Liverpool offices at 9a.m. on 26th March, in order to pick up their tickets for the trip to Belfast. He then reported to Chief Officer William Murdoch at about 12 noon the next day aboard Titanic.

On sailing day, 10th April, 1912, Pitman was assisting First Officer William Murdoch at the stern of the ship. This involved supervising the members of the deck crew who were casting-off the mooring ropes, and taking on the lines from the tugs.

At the time of the collision, Pitman was off-duty, and was lying in his bunk in the Officers’ Quarters behind the bridge on the Boat Deck. He heard the sound of the collision, but felt nothing out of the ordinary, but as he was due on duty in less than twenty minutes, he decided to get dressed. He had just about finished when Fourth Officer Joseph Boxhall rushed in and told him about the collision with the iceberg.

The two of them left the Officers’ Quarters and bumped into Titanic’s most junior officer, Sixth Officer James Moody on the Boat Deck, who informed Boxhall and Pitman about the large quantity of ice that had been deposited in the forward well deck. Pitman went to investigate, and saw some of the third class passengers enjoying a make-shift game of football with the chunks of ice.

He then walked to the forecastle, and looked around for damage, but could find none, so he made his way to the bridge to report for duty.

Once the order had been given to uncover the lifeboats by Captain Smith, Pitman and Murdoch had been given the job of uncovering the starboard lifeboats. They were both impressed with the new design of lifeboat davit, although later on both of them would experience problems when lowering the boats, caused by the newness of the ropes and new paint making the pulleys stick.

Whilst Pitman was standing next to boat 5 awaiting further orders from the bridge, Bruce Ismay, whom Pitman had never met, came walking along the deck, and told him, “There is no time to lose.”

Pitman, not recognising the stranger, just ignored him, and this time, Ismay insisted that he really must start to load the boats with the women and children. Pitman turned to Ismay, and said, “I await the Captain’s orders.”

Ismay walked down to the next lifeboat, number 7, and Pitman, suddenly aware of who the meddling stranger was, went to the bridge to enquire of Smith if they should do what Ismay had told them. Smith told Pitman to, “Carry on” and he returned to boat 5 where he had been to rude to Ismay a couple of minutes earlier. He jumped in to the lifeboat, and shouted “Come along ladies” to get the loading process underway. But many people were reluctant to get in, and a few people were of the opinion that they were much safer aboard the ship, than out in the pitch black ocean in a tiny lifeboat.

Once loaded, Murdoch put Pitman in charge of lifeboat No. 5. He shook his hand, and said to Pitman, “Goodbye. Good luck.”

Murdoch had told Pitman to stand by the after gangway doors with the lightly loaded lifeboat, and take on more passengers from there.

Pitman watched Titanic sink, together with the other horrified people aboard boat No. 5., who were stood about 400 yards away from the foundering vessel. He was one of the few people who claimed to have seen Titanic sink in one piece. As the ship’s stern disappeared beneath the cold of the Atlantic, he looked at his watch, and said out aloud, “It is 2.20am.” The cries from the hundreds of people could be heard, and Pitman decided that he would row back to take on board some more people.

He stood up, and announced to the rowers, “Now men, we will pull toward the wreck.” This caused many people aboard the boat to protest, afraid that their boat would be inundated with people seeking rescue, and that there was a real possibility of the boat sinking. Pitman reluctantly relented, but he would be haunted for the rest of his life for not returning.

He returned home to England aboard the Adriatic II, and was met by members of his family when it docked in Liverpool.

Pitman eventually decided to move to less responsible duties, citing his deteriorating eyesight as the factor, and joined the White Star Line’s Purser’s Department. Ironically, one of the ships he served aboard in this role was Titanic’s older sister vessel, Olympic. To quote Walter Lord’s ‘The Night Lives On’, he ‘spent the rest of his seagoing days shuffling paper’.

He served for thirty-five more years, retiring to Pitcombe, in Devon, where he passed away in 1961.