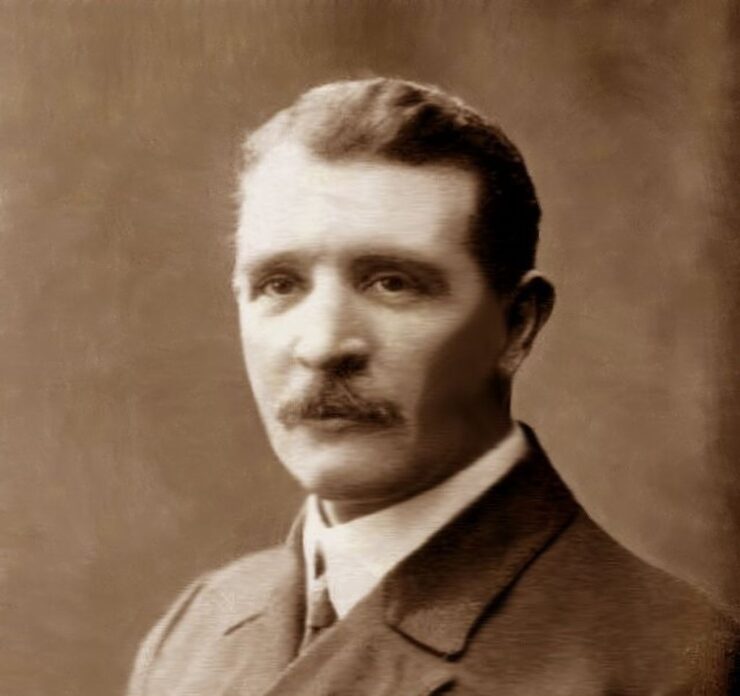 Titanic’s First Officer, William McMaster Murdoch, was lost in the disaster, but to ensure that he was never forgotten, this plaque was dedicated to him in his home town of Dalbeattie, Scotland. The wording of the plaque can be seen further down the page.

After the release of James Cameron’s hugely successful movie ‘Titanic’, there was uproar in Dalbeattie due to way the character of William Murdoch was inaccurately portrayed in the film, and in effort to go some way towards making amends, the film-makers, Twentieth Century Fox, donated £5,000 to the Murdoch Memorial Prize Fund, see the full story here below.

LONDON (Reuters) – The makers of the film Titanic have apologized to a Scottish town for turning its local hero into a villain, a British member of parliament said on Wednesday.

The Oscar-sweeping Hollywood movie showed the Titanic’s first officer, William Murdoch, taking a bribe, shooting a third-class passenger who tried to fight his way into a lifeboat and then turning his gun on himself.

20th Century Fox admitted in a letter to Alisdair Morgan, the member of  parliament for Murdoch’s hometown Dalbeattie, that it had no evidence the first officer of the fated ship had done any of those things.

The film maker also donated $8,340 to a memorial fund set up in Murdoch’s  honor.

A copy of the letter was made available to Reuters, but there was no immediate comment from 20th Century Fox.

Titanic historians say that Murdoch did his utmost to save passengers, guiding them into boats and then throwing deck chairs overboard for those in the sea to cling to. He drowned when the ship went down.

In the sea-faring town of Dalbeattie, Murdoch’s heroism is honored with a plaque on the town hall and there was outrage at the portrayal of him in the film.

“As a Scotsman myself and one who has spent some of the best days of my life in the heart of Dalbeattie, no one is more interested in setting the record straight about one of its citizens than I am,” 20th Century Fox’s Executive Vice President, Scott Neeson, wrote to Morgan. But Neeson said Dalbeattie had misunderstood the film-maker’s intention to show Murdoch as “one of the most humane, selfless and sensitively drawn characters.”

Director James Cameron had meant the audience to understand that Murdoch was disgusted by the attempt to bribe him and killed himself in remorse over his  panic shooting of the belligerent passenger, Neeson said.

Records dating from the disaster put on display Wednesday by Britain’s Public Record Office show that Titanic survivors were impressed by the cool behavior of the crew.

“Nothing but the most heroic conduct; perfectly orderly,” a survivor named “Gracie” told a U.S. Congress inquiry in 1912.

“They showed very good judgment … they were very cool,” said another survivor, identified only as Stengel.

Around 1,500 people died when the Titanic went down in 1912 after striking an iceberg.

The public records suggest another inaccuracy in the film — the scenes showing third-class passengers being barred from reaching the upper decks where the lifeboats were being loaded.

The official inquiry showed that third-class passengers had not been prevented from leaving their quarters and suggested that many were reluctant to leave, believing the ship to be unsinkable.