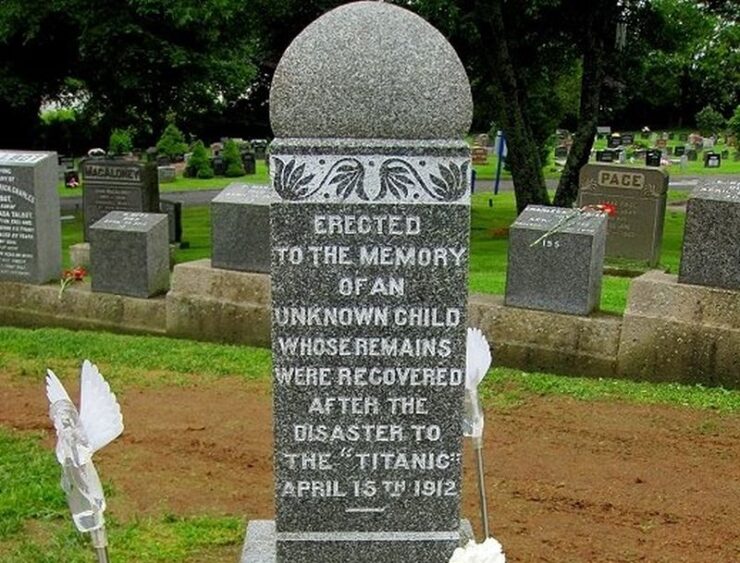 Many of the bodies recovered in the days and weeks after the sinking were sadly never identified, although many have been tentatively identified in the 90 years since the disaster, using information and personal effects collected from the body, such as hair colour, height, quality of clothing, country of origin of currency, etc. But this was generally not enough to definitely identify someone, and many bodies were buried anonymously, with only the body number and ‘DIED APRIL 15, 1912’ engraved on the upper face of the small headstones, as seen here in the photograph here below right.

In the days following Titanic’s sinking, the crew of the main recovery vessel, the Mackay-Bennet, had recovered the small body of a little fair-haired boy, and with nothing to identify him as you could an adult such as a wallet or a driving licence, he sadly remained unidentified.

The authorities in Halifax were overwhelmed with offers from people and organisations wanting to sponsor the toddler’s funeral, and provide a headstone to mark his grave.

The difficult task of selecting the child’s sponsor was made far easier when Captain Lardner and the crew of the Mackay-Bennet offered to sponsor his service. It seemed like the whole of Halifax came out for the funeral, such was the widespread feeling for this poor, innocent, nameless little child.

Ninety years later, in early November 2002, it was announced that log-running D.N.A. tests performed on the remains had been matched to a family from Finland who had lost ancestors in the sinking. Experts in D.N.A. matching from Lakehead University, Ontario, Canada determined it was the body of Eino Viljami Panula, who was a mere 13 months old at the time of the sinking.. He was one of five brothers from Finland who died in the disaster, along with their mother.

In 2011, due to advanced D.N.A. testing, it was announced that Sidney Leslie Goodwin was in fact the body in the grave of the unknown child.