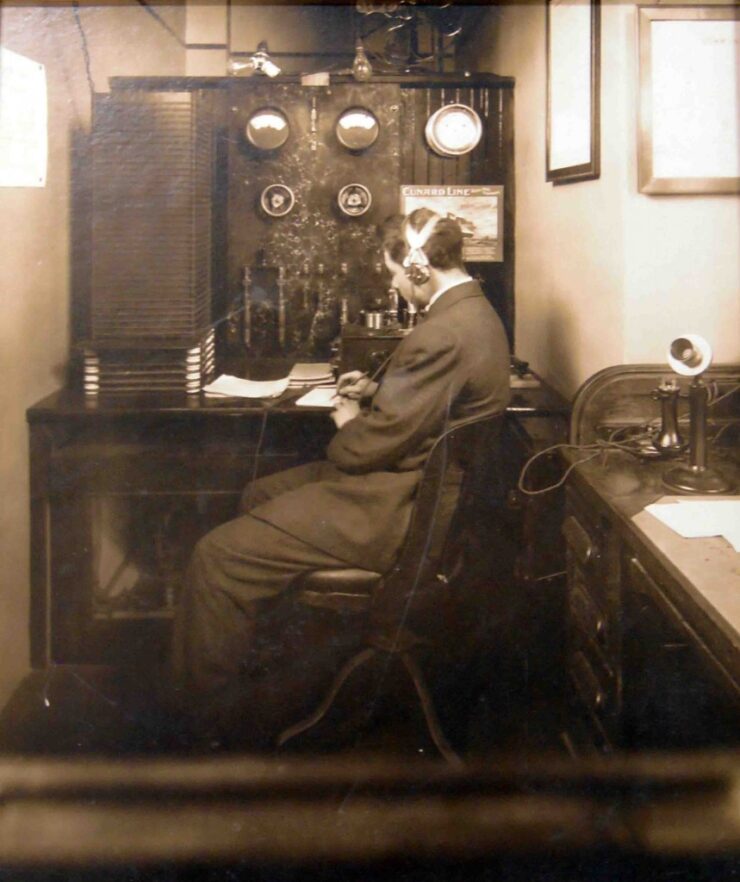 Although Titanic was the latest and greatest vessel afloat, boasting the latest equipment, and decorated in a style more lavish than any hotel of the era, its radio room was little more than a cupboard with a Morse Code transmitter and key, like the one pictured here on the left. Radio communications were not exactly in their infancy in 1912, but they still relied on Morse Codeas the primary communicator.

Morse Code was adequate, but hardly efficient. It required an operator to sit listening for incoming messages and warnings. It was not like a modern day fax machine or telephone, where a sent message can be recorded or saved until the person it is for can read it. An operator had to sit, often for very long hours, in a room the size of a closet, receiving and transmitting messages to other shipping, as well as to land stations too. A combination of short and long signals, known as dots and dashes, were interpreted by the operators and written down. They were then passed on to the appropriate officer, or to the purser if the message was for a passenger.

Titanic had two radio operators, although they were not strictly speaking part of the crew. Senior operator John George Phillips and his junior, Harold Sydney Bride were actually in the employ of the British Marconi Company, whose equipment was installed on board, but they were paid by the White Star Line.

Between them, using a mutually agreed shift system, they kept the radio in operation 24 hours a day, although this was not required by law at the time, and it wouldn’t become law to do so until after the sinking. The transmitting equipment was probably the most powerful aboard any vessel of the time, at 1.5kw, and during the day, the operators had a 400 mile transmission range. At night, the range could increase to nearly three times that distance, the messages being sent and received via the large antennae slung between Titanic’s two masts.

As Titanic had left Queenstown, Ireland, the radio traffic had consisted mainly of messages for, and from passengers. It was the job of the operators to intercept messages for their ship, and also to intercept general messages and warnings regarding the area the ship was sailing in to, a kind of advanced warning. Each radio station had its own call letters, ‘MGY’ being the ones assigned to Titanic, and ‘MKC’ was her sister vessel Olympic. As well as the call letters, Titanic was also assigned ‘ADVISELUM’, this being the code-word for passengers’ private messages.

Ice is a seasonal hazard in the unforgiving winter seas of the North Atlantic, and in the couple of days since leaving Southampton, many ships had reported ice in the exact area into which Titanic would be sailing. On the 11th April, she received 6 warnings from ships stopped in, or passing through, heavy ice, 5 more on the 12th, 3 more on the 13th, and 7 on the 14th.

All of these messages would have been written down as they were intercepted, logged in the radio book, and passed on to the officers on the bridge. There was now no way that the Captain, along with the officers, would have been unaware of the huge field of ice that now lay directly in front of Titanic.