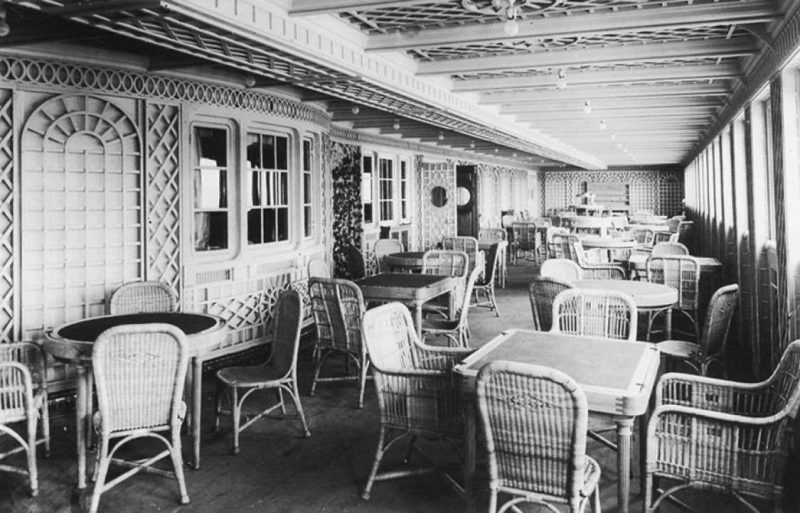 Undoubtedly the high-point of any day for the majority of the passengers aboard Titanic was the meals. First Class passengers enjoyed cuisine of the highest standards, and as the Second Class passengers’ food was prepared in the very same galley, which was situated on ‘D’ deck immediately above the engine room, it’s quite likely that much of their food was also of the same high standard, without many of the frills and extra courses that First Class demanded.

Third Class passengers were also well-catered for, although admittedly much of the food was quite basic, but it was only a few short years previous that those in steerage had to bring their own food with them to last the whole of the journey, so things were definitely improving, even for the most lowly of travellers.

First Class breakfast menu from the morning of Thursday, April 11th, the day that Titanic called at Queenstown, Ireland. It’s fair to assume that after the excitement of the previous day’s departure, a good night’s sleep will have been the order for most of the First Class passengers, and waking-up fully refreshed on the Thursday morning to be faced with the sumptuous menu shown here must have given one a truly wonderful feeling of pure indulgence!

Before any meal, the ship’s bugler, Peter W. Fletcher, would pass from deck to deck sounding the traditional meal call aboard White Star liners, ‘The Roast Beef Of Old England’. The passengers would all make their way to their respective dining rooms. The First Class Dining Room, was located on ‘D’ deck between the second and third funnels, and most of the people would meet up in the First Class Reception Room for an aperitif prior to going into the Dining Room itself.

The dinner menu is dated April 14th, 1912, the night of the collision, so for many passengers this would be their final meal. And what a meal! An eleven course marathon with a diverse choice of fare washed down with the very finest wines would leave even the heartiest diners feeling joyfully merry and bloated.

The Second Class menu is again dated April 14th, 1912, the night of the actual collision, and again for many of the Second Class passengers, this meal would be their final repast.

A good hearty three-course meal with coffee to follow if desired would certainly be enough for the biggest eaters aboard, and with a choice of four main courses and yet another seven choices of dessert, there was surely something to suit everybody’s palette. The Second Class Dining Room was situated on ‘D’ deck too, but much further aft, just in front of the base of the mast.

This menu from Titanic’s Third Class accommodation lists all of the day’s meals on the same card. Although the choice of food may look bleak and almost unappetising compared to the fare on offer in First and Second Class, for many steerage passengers the food was much better than what they had been used to at home, so there was no need to improve the quality any more.

MORE INFORMATION:
Last Dinner on the Titanic: Menus and Recipes from the Great Liner by Rick Archbold and Dana McCauley.

A collection of over 60 stunning recipes designed to recreate the meals featured on menus like the ones seen on this page. The book features everything from the lowliest of fare as dished-out to the steerage passengers, right up to the 10 and 11-course meals enjoyed by the wealthy in First Class.