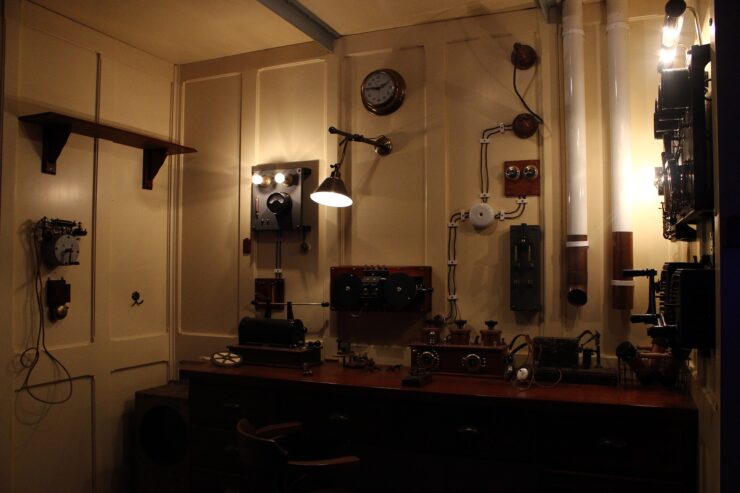 The story about the Titanic being without any binoculars for the look-outs and crew is almost correct. Titanic’s Second Officer had originally been David Blair, but when Henry Wilde was assigned to Titanic’s maiden voyage because of his experience as Chief Officer aboard Olympic, the remaining officers’ ranks were changed, and Blair was the one removed to make way for Wilde.

The binoculars were actually aboard the vessel, inside a locker in the cabin that Blair had originally occupied between Belfast and Southampton, although it would seem that nobody knew they were there at all. But many historians are of the opinion that binoculars would have made no difference to spotting the iceberg on the night of the sinking, given the conditions.

The Blue Riband itself is a mythical ‘prize’, which is awarded to the liner that makes the fastest crossing of the Atlantic. Legend has it that Titanic was trying to claim the Blue Riband, hence the reason she didn’t slow down when approaching the ice field where she eventually met her fate. The fact was, Titanic was not designed as a fast ship.  She had two reciprocating engines plus a centerline turbine, which were no match for Lusitaniaand Mauretania’s all-turbine design. Titanic’s top speed would be about two knots slower than Lusitania’s, and over a journey as long as an Atlantic crossing, the White Star liner would be no match.

The story regarding a fire in one of Titanic’s massive coal bunkers is indeed true. The fire is believed to have been burning when Titanic left Belfast, and it was not until two or three days later that it was finally extinguished, this being done by teams of firemen and trimmers digging out almost all of the coal to enable the seat of the fire to be doused. Some Titanic scholars believe that the intense heat of the fire could have led to some parts of the hull to be seriously weakened, and actually assisted in the break-up and sinking of the vessel.

Titanic’s fourth funnel was indeed a ‘dummy’, built to satisfy the balance and beauty of good liner design. But although it carried no smoke or fumes from the ship’s boilers, it wasn’t completely idle, as it provided ventilation for the turbine engine room, together with the reciprocating engine room.

The legend of fireman Frank Tower would have you believe that not only did he survive the sinking of the Titanic, but was also aboard the Empress of Ireland when she collided with the Storstad, and the Lusitaniawhen that vessel was torpedoed and sunk by a U-Boat in May 1915 off the southern coast of Ireland. In fact, no person by the name of Frank Tower appears in any crew lists for those three vessels.

For many years the myth has persisted that the iceberg Titanic hit tore a 300 foot ‘gash’ down the side of the hull. This takes some believing, and indeed has been proved to be totally unfounded. It has been demonstrated that because of the time Titanic actually took to sink, from the moment of impact, right up to the hull’s break-up and sinking, that the total size of the damage would only amount to approximately 12 square feet.

Divide that figure by the 300 foot length of the breech in the hull, and the ‘gash’ would have to be a mere 3/4 of an inch wide for its entire length, a virtual impossibility! A far more plausible theory is that as the iceberg scraped down the side of the hull, it buckled the plates, popping rivets and opening seams as it progressed further down the hull.

Many people believe that so many people died as a result of there not being enough lifeboats for everyone on the ship. But if you study exactly what happened on the night, you must appreciate that not only was time was at a premium, but also that suitable manpower was totally inadequate.

There were just over 50 members of the deck crew who were trained to launch a lifeboat, and the loading of the boats that night was painfully slow. Couple that with the near disaster of lowering one ‘boat on to another, and the interference from outsiders, and you begin to understand the theory. Finally, the proof of the above theory is this – The crew didn’t even have time to hang the two collapsible lifeboats ‘A’ and ‘B’ in their respective port and starboard davits. Time had run out, and the two Englehardt’s had to float off the sinking ship.

Titanic sank because it carried in its hold the Mummy of Amen-Ra, a mummy that carried a curse of death and destruction. Of course, this is pure fiction, although strangely, it is borne out of fact. During the voyage, the famous spiritualist, William T. Stead, had told a dinner party the story of the Mummy of Amen-Ra, which was actually on display at the time at London’s British Museum. In the days and weeks after the disaster, many incorrect or totally fabricated stories were published in the press, and the story of the Mummy of Amen-Ra actually being aboard the fateful liner was born.

The often related story regarding Titanic’s ‘anti-Catholic’ hull number is a myth. After the disaster, rumours began to spread that Titanic’s hull number, 3606 04, when written badly and viewed through a mirror, spelled out ‘No Pope’. In the staunchly religious Belfast, this was seen as almost blasphemous by the devout Catholics, and certainly unlucky for the ship. The reality is that this was probably ‘a bit of fun’ started in some protestant pub adjacent to the shipyard’s of Harland and Wolff. Titanic’s hull number was of course ‘401’, which even the most amateur Titanic fan will tell you!

Omar Khayyam (1048 – 1122) was a Persian mathematician, astronomer and philosopher, and a copy of his work, ‘The Rubaiyet’, was present aboard Titanic. This was no ordinary copy though; the cover was a peacock design made from gold and studded with over 1000 rubies and emeralds. It had just been purchased at auction for £405 and was being taken to its new home in New York. The Rubaiyet is often mentioned when talk of salvage arises, but it is hardly a priceless treasure. It certainly wouldn’t pay for the costly salvage expedition required to find it, which could cost millions of dollars to undertake, without any guarantee of success.

Over the years Titanic has been described as the ‘Unsinkable Ship’. This came about because at the time of Titanic’s fitting out, there was a special edition of The Shipbuilder magazine, in which Titanic was described as ‘practically unsinkable’, due to the double bottom, watertight compartments etc. The White Star Line certainly never described her as such, but with the passing of time, many books and films go so far as to suggest that they did.

A common story around the pubs of Ireland, even to this day, is the one about workers at Harland and Wolff being trapped in Titanic’s hull during construction. This is of course rubbish, however, its source is believable; at the end of the working day, inspectors would check the work of the riveters, and count the work done to calculate bonuses due for piece-work.

The tapping of their hammers on the work to check for soundness would have led some of the older hands to tell the young and often-gullible apprentices (‘go fetch a bucket of sparks!’) that it was a worker trapped in the hull, and that is probably how the rumour began.