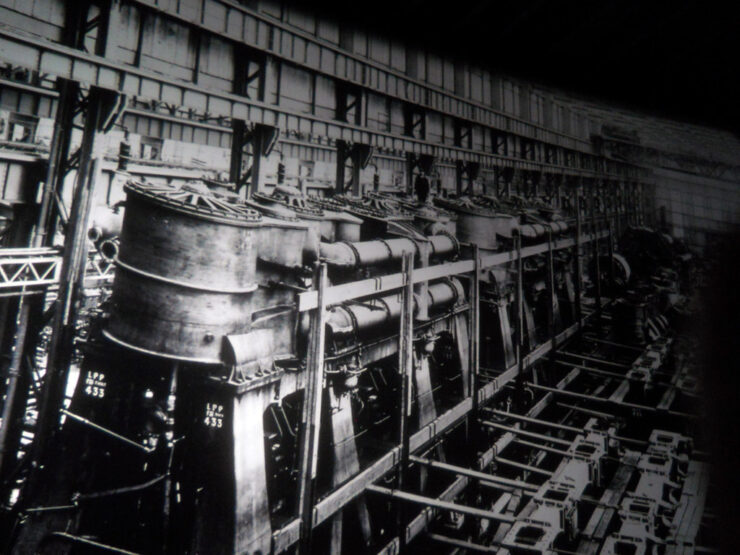 As Titanic was the largest moving man-made object built to date when launched, she needed some rather powerful machinery to push her along. The White Star Line’s major rival, Cunard, was already operating the quadruple-screw, turbine-driven sister ships Lusitania and Mauritania, and the turbine-only propulsion system these vessels both employed was a great success, combining good speed with economy too, and embraced technology that would dominate shipbuilding for years to come.

But Harland and Wolff, the builders of the Olympic-class liners, had very little experience with the relatively new turbines, and White Star had to settle for a traditional system of two huge triple-expansion steam engines, powering the port and starboard wing propellers, together with a small turbine driving the center propeller. It wasn’t exactly state-of-the-art, but it was proven and reliable, two factors that were of immense importance to a company with a reputation for quality, not speed. One of Titanic’s massive engines lies almost compete in the Harland and Wolff Machine Shop.

A triple-expansion steam engine works by re-using steam that would otherwise be wasted as exhaust, like in a steam locomotive, or it would be returned to the condenser, to be turned back into water to be used again. This extracts the maximum amount of energy out of the steam, and also provides a better level of economy, using less coal, less firemen, less boilers, etc. Once the steam leaves the boilers, it is continually expanding, yet dropping in pressure and power. Therefore, each cylinder is slightly larger as the steam passes through the engine to provide a greater piston surface area for the reduction in pressure, which offsets the reduction in pressure somewhat.

The same cylinder as seen in the photograph, but this time viewed at the break in the hull.

1. Steam from the boilers, at 215 p.s.i., enters the small high pressure (HP) cylinder, moving the piston in the cylinder.

2. The steam exits the HP cylinder, and is routed to the next cylinder along, the slightly larger intermediate pressure (IP) cylinder, moving the piston in the cylinder.

3. The steam exits the IP cylinder, and is routed to the next cylinder along, the much larger low pressure (LP) cylinder, moving the piston in the cylinder. (On Titanic , each engine actually had TWO LP cylinders.)

4. The steam, at 9 p.s.i., was then passed to the turbine that powered the center propeller.

5. The steam is then passed to the condensers, where it is cooled, turning it back to water, ready to be passed to the boilers, where the whole process starts all over again.

All of the above process might seem long-winded, but in reality it only took a couple of seconds from the time the steam entered the first cylinder to the time it left the turbine.

N.B. The centre turbine was non-reversible.